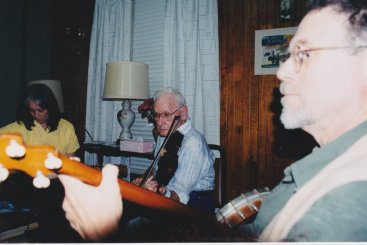 I’ve been meaning for a long time to write a post about my favorite fiddle player.  Joe Dawson was a master fiddler, carpenter, farmer, and a man of numerous other talents.  Joe’s repertoire of old-time fiddle tunes is totally unique, 100% Indiana and he taught them to a lucky circle of people who visited him at his weekly living room jam in Bloomington, Indiana.  I was one of these lucky folks and had the pleasure of jamming with Joe for over a decade.  Many of his tunes would be considered “crooked” (not in equal amount of measures or beats for each phrase) and could be very tricky to catch.   Here is a set of Joe’s tunes of played by Grey Larsen and Cindy Kallet:

Joe passed away May 11, 2012 and he and his music are missed greatly.  Grey Larsen and Cindy Kallet, Joe’s adopted family who spent countless hours playing music with Joe and recording his tunes and memories, wrote this lovely tribute:

Joe Dawson, master carpenter and fiddler, and long-time resident of Prospect Hill, passed away at Hospice House in Bloomington on May 11, 2012 at the age of 84. In his last days he was surrounded by his dearest friends.  He was predeceased by his beloved wife Lela (Pate) Dawson, his sister Mildred Wells and his parents Cletus Dawson and Myrtle Dawson Walker.  Joe was born in Bedford, Indiana on April 22, 1928. When Joe was ten his father died in an accident, and his mother moved to Bloomington to find employment. Joe’s sister lived with his mother while Joe went to live with his mother’s parents, Jasper and Ida Chambers, on their 140 acre farm on the Monroe/Brown Country line.Though money was extremely scarce, Joe and his grandparents were able to provide for almost all their needs by growing their own food, raising livestock, bartering eggs for supplies and by hewing and selling railroad ties. Years later, most of the farm was submerged by the formation of Lake Monroe. Due to the responsibilities of helping his disabled grandfather on the farm, Joe did not have to serve in World War II, but he was drafted to fight in the Korean War and saw heavy combat. Early in life Joe picked up carpentry skills from his father, and after the war he worked for a time at Showers Brothers Furniture. He soon moved on to work for Superior Lumber, Pritchett Brothers Construction and CFC Incorporated. As a master carpenter he was indispensable in the building of hundreds of important structures in Bloomington and beyond, including Beck Chapel, Fountain Square Mall, and the Graham Plaza Hotel. On the side, for a time, he raised hogs on his farm near Adel in Owen County.  As a masterful fiddler, Joe kept alive a beautiful and important repertoire of traditional music from Monroe and Brown Counties, music that has many of its deeper roots in Kentucky and the larger Appalachian mountain region. He learned this music from the fiddle playing of his grandfather, Jasper Chambers, as well as from other relatives and neighbors, while living on the family farm. He passed that music along to many younger musicians who continue to play it today. The Thursday night music sharing sessions that he convened in his living room for many years were a joy for those who were lucky enough to gather there to learn the tunes and all the stories and lore that went with them. Recordings of Joe’s fiddling and anecdotes will soon be deposited in the IU Archives of Traditional Music in Bloomington.

The recordings of Joe have been submitted to the Indiana University Archives of Traditional Music in Bloomington, Indiana and will be available online through there website in the near future.  What a treasure!  I love playing and teaching Joe’s tunes to other people and I recorded three of them on my new CD, Kitchen Fiddle.  I hope many people listen to, learn and treasure Joe’s music for years to come.